This vegan cauliflower leek soup is deliciously creamy, super easy to make and so comforting. Say goodbye to your traditional potato leek soup recipe and hello to a lighter, healthier leek soup without potatoes.

This post has been updated from the original posted March 5, 2018. This post may contain affiliate links. As an Amazon Associate, I earn from qualifying purchases at no additional cost to you.

I have been making potato leek soup for years. I love the flavor and the creaminess, plus the healthy benefits of leeks are a super draw for me. It’s so easy to swap the chicken broth in your favorite leek soup recipe for vegetable broth for an easy vegan potato leek soup.

Take it one step further the next time you make soup with leeks and swap those potatoes for cauliflower for an incredible creamy soup that’s a delicious meal the whole family will enjoy. Cauliflower is the perfect substitute for potatoes. When pureed into the soup, it provides the same texture as the potatoes, yet fewer calories and an abundance of vitamins, minerals and health benefits.

Vegan soup recipes are totally my jam, and as the weather cools off a hearty bowl of soup is just the kind of cozy meal I’m craving. Last summer I discovered that this delicious soup also tastes great served cold. Oh, yes…cauliflower and leek soup is now my favorite soup year round.

Why you’ll love this recipe

How to wash leeks

Vichyssoise is a French word that literally means cream of potato and leek soup. Lore has it that a man named Louis Diat, who hailed from a French town called Vichy, created a cold version of leek and potato soup by stirring in cold milk. He served this at the Ritz-Carlton in New York where he was the chef.

Vichyssoise is a French potato soup that is served cold. Good news for Vichyssoise lovers who are looking for a healthier version. This vegan cauliflower leek soup tastes great served cold or hot, making it a great substitute for the French classic and a fantastic soup to serve during hot weather.

How to make this soup

How to store and freeze soup

What part of leeks do you use for soup?

The best part of the leek, if you’re looking to add flavor to soup is the white part. The light green part can also be used, but the darker green part is tough and woody. A quick saute of the green parts will make them more tender and usable in leek soup.

Leeks have a lot of health benefits ranging from improved digestion and reduction of inflammation to healthier skin, teeth and eyes. Traditional leek soup uses heavy cream, heavily processed vegetable oil and often is garnished with sour cream..ingredients that are much less healthy.

A better idea for a healthy leek soup is to use vegetable stock, omit the dairy and replace the starchy potatoes with cauliflower. This cauliflower and leek soup is still rich and creamy, totally satisfying and a great alternative to the traditional recipe.

Did you know commenting and rating recipes is one of the best ways to support your favorite food bloggers? If you made this recipe, please consider a five star rating below and leave a comment. Also, please share your photos on instagram by tagging me @dkhealthcoach and using the hashtag #debraklein 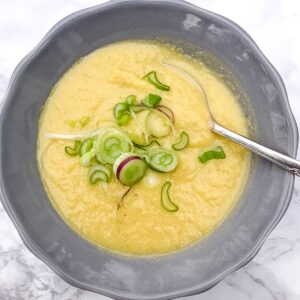 If you're in a hurry, use riced cauliflower and cut down the cooking time. Riced cauliflower will be ready to blend in about 5 minutes. OPTIONAL TOPPING: Fresh parsley, thyme or spring onions.

Serving: 1bowlCalories: 304kcalCarbohydrates: 35gProtein: 11gFat: 6gSaturated Fat: 1gPolyunsaturated Fat: 5gCholesterol: 1mgSodium: 363mgFiber: 16gSugar: 15g
Did you make this recipe? Please leave a review below, then snap a picture and tag me @dkhealthcoach or use hashtag #dkhealtcoach on Instagram so I can see it!!